Virunga National Park in the Democratic Republic of Congo is considered among the most bio-diverse areas on the planet and home to many critically endangered animals. It is also one of the most dangerous conservation projects in the world. 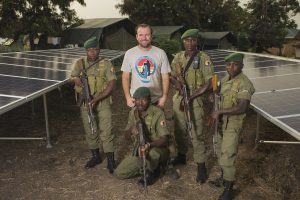 GivePower Executive Director, Barrett Raftery, with some of the heroic rangers of Virunga National Park, who bravely protect the natural resources and local wildlife from poachers and dangerous intruders.

Virunga National Park in the Democratic Republic of Congo is considered among the most biodiverse areas on the planet and home to many critically endangered animals. It is also one of the most dangerous conservation projects in the world. The park faces ongoing threats of poachers, armed invaders and oil prospectors.

Protecting these conservation efforts and over 3000 square miles of land, are but a few hundred brave rangers. Standing up against unfathomable odds, these rangers risk their lives every day. Tragically, in April of 2018, 6 rangers were ambushed and killed in the line of duty.

In 2016, GivePower installed 3 micro-grids to restore critical, life-saving communications systems for the rangers, as well as power electric cooking (further reducing the need to cut down trees for use as charcoal). It was an honor to help in any way possible: providing basic comforts and resources; to let them know that, in a brutal world, they have allies eager to ease their hardships and support their mission of saving one of the most beautiful places on Earth.

Across every category, these rangers had a more difficult life than most I’ve seen: food was limited, logistics were hard, living conditions spartan. Despite the daily challenges that would bring most of us to tears, these rangers shared a sense of calm, appreciation and good spirit.

I felt safe in a very dangerous place, as did our whole team.They knew they were doing good work, they were proud of it, and it enabled them to bear the challenges of daily life with temperance and humility.

Throughout my work at GivePower, I’ve encountered many heroes that are doing the work that we should all be doing. They carry the load of an unjust world on behalf of us all. I cannot think of a better example of this than the men and women protecting Virunga.

Next StoryA Grateful Perspective: How the Treks Began

We are a team of engineers, developers and clean energy thought leaders. We design, build and deploy renewable energy systems that provide food, water and light to those who need it most.